As the Ospreys prepare to take on Worcester Warriors at the Liberty Stadium on Saturday afternoon, we take a trip down memory lane to revisit previous clashes between the two teams.

In four competitive fixtures, three of which were at Worcester’s Sixways Stadium, the Ospreys have gained two victories and two losses, scoring 119 points (16 tries) and conceding 89 points (8 tries).

Take a look at how we’ve fared in our previous clashes ….

The last time these two sides met back in October, a stunning second half fightback from a young Ospreys team at Sixways ensured they headed home from Worcester with a losing bonus point.

Worcester took their chances in the opening exchanges to lead 21-0 at the break. Cory Allen scored early in the second half to kick start the comeback for the visitors. Rob McCusker added to the scoreboard with his first Ospreys try just before the hour mark, followed by the conversion from young fly-half Cai Evans, who scored his first ever senior Ospreys points.

Worcester grabbed a penalty after to keep their noses in front, but a dramatic final ten minutes saw Allen read Ben Teo’s pass well in midfield to break through for his second try. Evans nailing a difficult kick to make it a three-point game with five minutes left on the clock.

It was delicately poised but a scrum penalty on the Ospreys 10m line handed Worcester a shot at goal with 90 seconds on the clock, Shillcock making no mistake to make the game secure.

In 2012, the Ospreys ended their LV-Cup campaign with a defeat at a snowbound Sixways.

Matthew Morgan took the Ospreys to an early lead five minutes in, when he scored a try and picked himself up to convert. Worcester soon responded as Jake Abbott drove over the whitewash from close range, Andy Goode with the extras, which took both teams level, 7-7, at half-time.

Worcester were quick to build upon their extra man advantage from the restart of the second-half, scoring fourteen points when Sam Lewis was in the sinbin, as Josh Drauniniu scored two tries within three minutes inside the first ten minutes of the second-half, both successfully converted by Goode.

Returning to a full 15 men, the Ospreys scored their second try, 51 minutes in, through Hanno Dirksen who crossed the line out wide, converted by Morgan. However, this late try by Dirksen wasn’t enough to see the Ospreys come back for the win, as Goode pushed the Worcester warriors further into the lead as he opted to go for the posts from a penalty.

The players were really up against it during the final quarter of the game as weather conditions deteriorated and the green of the pitch became lost under blanket of snow. The game descended into something of a farce as conditions meant it was all a bit of a lottery, with no extra work for the scorers as it finished 24-14 to Worcester. 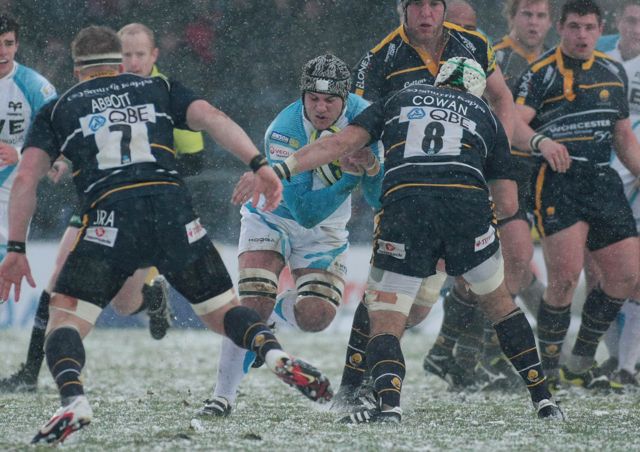 The Ospreys used home advantage to secure victory at the Liberty Stadium.

In a game littered with infringements and the sound of the referee’s whistle, between them the two sides converted ten penalties – James Hook taking five and Matt Jones, a former Osprey, also taking five for the Worcester Warriors.

During the last ten minutes of the first half, the Ospreys capitalised on Worcester being a man short with Jones in the sinbin, as they took charge of the contest. Thirty-three minutes in Nikki Walker pounced for an unconverted try and then, just before the half-time whistle, Gavin Henson burst through a midfield hole to claim a brilliant, but unconverted try, pushing them into the lead at half-time.

Shane Williams was quick to react from the restart and crossed the line four minutes into the second half, which Hook successfully converted, taking them further in front. Tom Smith was then sinbinned and the Ospreys being one-man down allowed Worcester to take charge up-front, and they ploughed through the Ospreys defence for their first try of the afternoon, Jones with the extras, In the dying seconds of the game, Tommy Bowe sprinted over the whitewash to secure a bonus points for the Ospreys. 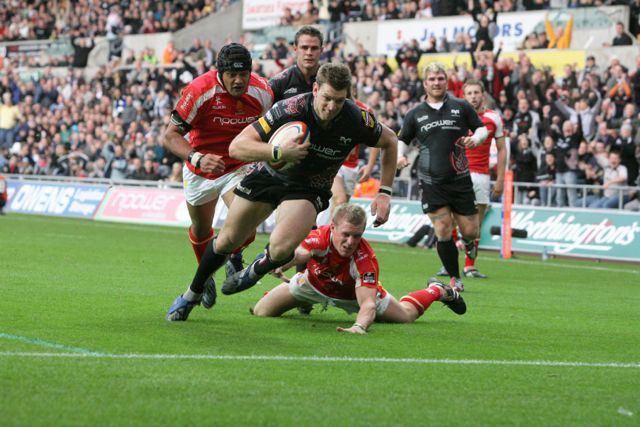 After taking to the road, the Ospreys dominated play and secured a convincing win, running in seven tries across the eighty minutes, to Worcester’s one, on their way to securing the Anglo Welsh crown at Twickenham later in the season.

The Ospreys were on top from the first whistle, the Ospreys crossed the line on three occasions in the first half: Lee Byrne at eleven minutes in, second from Nikki Walker at sixteen minutes, and third from Shane Williams at 38 minutes in – all successfully converted by James Hook. Two penalties by Shane Drahm was all the hosts had on the board.

The away-team continued to dominate the second half. Despite Worcester’s efforts to fight back, gaining a penalty four minutes into the second-half and also securing a try from Craig Gillies, successfully converted by James Brown, the Ospreys proved too strong for their opposition.

Sonny Parker, Williams for his second, Mike Phillips and Byrne, also for his second, kept the scoreboard ticking over, the first converted by Hook and Shaun Connor adding the extras for the final three. 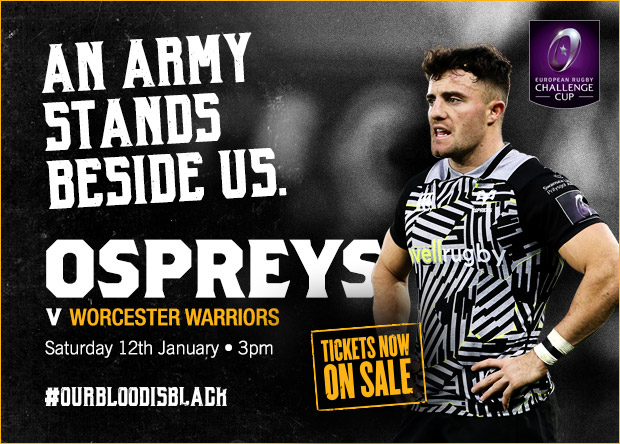