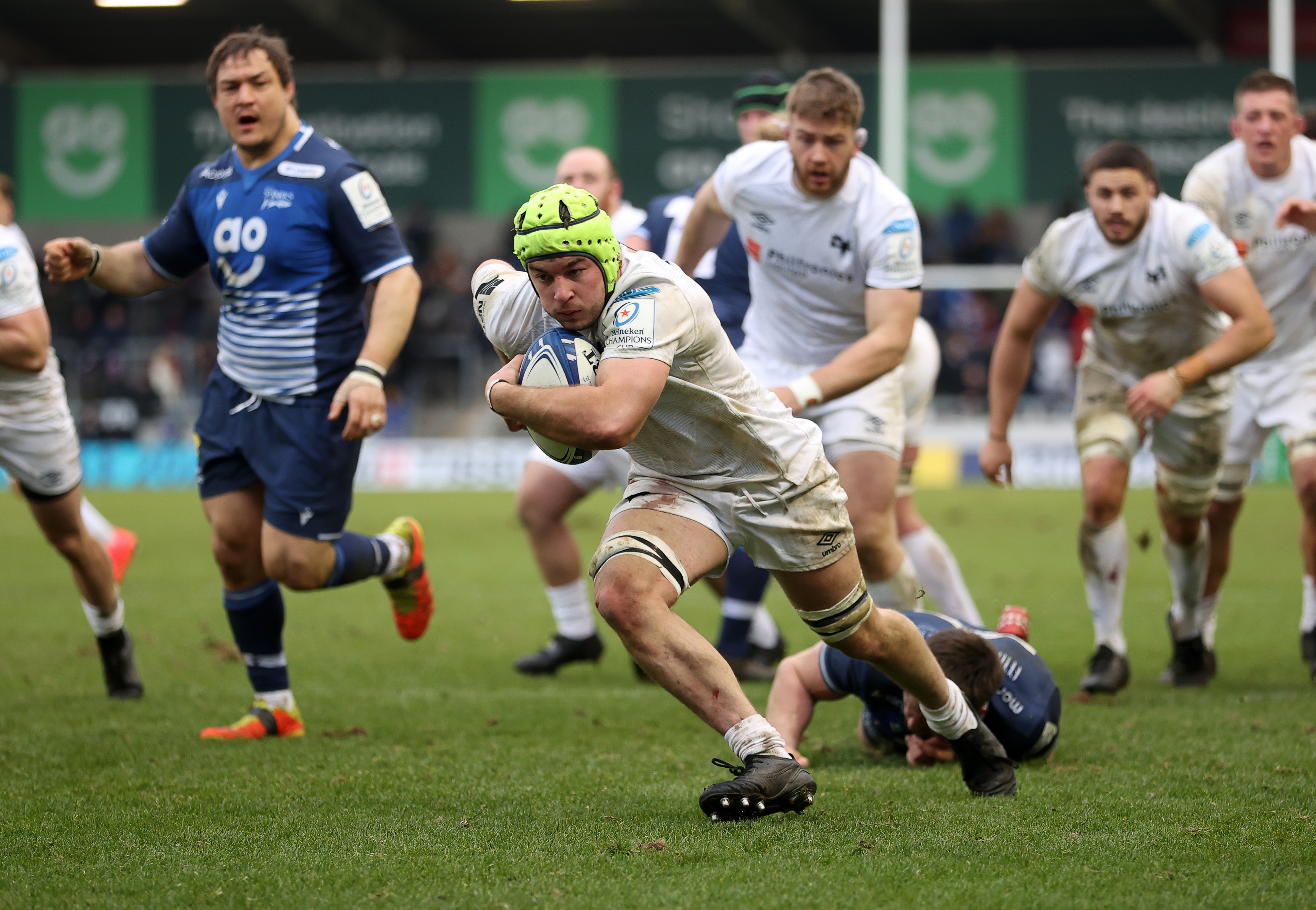 Deaves: “The last few weeks have been surreal."

Harri Deaves wears a yellow scrum-cap, but that’s not the only reason the Ospreys flanker is catching the eye.

The 20-year-old looks like a Belisha beacon on the field in order that his grandmother, May, can spot him more easily.

But even if he toned down his headgear, the chances are that people would still notice Deaves, such is the impression he has made in just two senior appearances for his region.

On Saturday evening, the youngster from Pontyclun will try and be in the thick of things again when the challenge could not be tougher – an away match at URC champions Leinster, which is live on S4C.

“I’ve been wearing that scrum cap forever,” says Deaves. “My nan got it for me because she couldn’t see me.”

It was prominent against Sale on his debut last month in the Heineken Champions Cup, when Deaves scored a try and was arguably the under-strength Ospreys’ most effective player despite a 49-10 defeat.

The cap was highly visible against Edinburgh, too, when the openside was all over the Scottish team in the Ospreys’ 23-19 victory.

The impressive step up by Deaves – who played for Wales U20s last season – could not have been more timely for his region, who are without their decade-long standard-setter Justin Tipuric for the rest of the season because of a shoulder injury.

The knock-on from Tipuric’s absence has been that Jac Morgan has been required by Wales for Six Nations duty, leaving the Ospreys to turn to Deaves.

“The last few weeks have a been surreal,” says Deaves, who admits Tipuric was his childhood hero.

“I made my debut for the Ospreys and my European debut on the same day, so that was strange. One day you’re watching these teams on TV and the next you’re playing against them.

“The biggest thing for me was to get picked the following week, because that showed I must have made an impact in the first match and must have been half-decent.

“It was very nerve-wracking playing the debut game. But the more I play, I think I’ll feel more confident. I think I’ll settle.

“Now, I’m looking forward to the Leinster game. It’s massive test to play Leinster away and a bit daunting but you have to take things in your stride.

“We have come off the back of a good win against Edinburgh, so we should feel pretty confident in our ability.”

Deaves had the support of a small fan club up in Sale, including his mother, father, sister, grandfather and eight of his mates.

They have backed him all the way in his fledgling career, right from the days when he was carrying a dream in his head as a kid – to be the next Justin Tipuric.

“As a kid, Tips was my hero growing up. I used to love him and now I’m playing with him.

“He’s such a quality player, I always looked up to him. It’s massive for me to have Tips and Jac about the place. They are both really down-to-earth guys who are happy to pass on their knowledge.

“They don’t have egos. They are both really good for me.”

Deaves was an 11-year-old watching on TV when Tipuric gave a masterclass against England in 2013 as Wales stormed to the Six Nations title with a 30-3 win.

“That dummy,” he says in simple admiration of Tipiruc’s role in the Alex Cuthbert try that sealed the memorable victory.

While Tipuric does a bit of moonlighting as a coach with his home village Trebanos, Deaves’ extra-curiculars involve still working as a part-time roofer, one day a week.

“I used to go to work straight from training when I was in the academy and do a half day of roofing,” he says.

“Now, being a full-time player we don’t finish until three or four o’clock so I can’t do that anymore.

“So, I just work the one day a week on my day off, now – and then maybe a Saturday or Sunday if I’m not playing at the weekend.”

Does he do it to stay grounded?

“I do it for the cash. You’ve got to pay the bills, haven’t you?

“But I think I’ll probably finish the roofing by the time the new season starts.”

Safety-conscious Ospreys fans will be glad to hear that, although they will hope he shows a head for heights in Dublin on Saturday night.

Leinster, though, have shown small signs of vulnerability this season. They lost at home to Ulster back in November and were beaten by Cardiff in their last away game three weeks ago.

“They will have a lot of players away with Ireland,” says Deaves. “But whatever team Leinster put out, will be a team capable of beating anyone, so we just have to focus on our own game and get things right.”

Live coverage from the RDS Arena in Dublin of the United Rugby Championship match between Leinster and the Ospreys. English commentary available.