As the focus moves from Europe to the Guinness PRO12 after back-to-back bonus point wins over Grenoble, Sam Davies says that consistency is the key to success for the Ospreys over the coming weeks.

Ten points from the back-to-back games against the French side cemented the Ospreys’ position at the summit of European Rugby Challenge Cup Pool 2, ahead of the final two rounds next month.

Reflecting on what has proven to be a big couple of weekends for the region’s hopes of progression to the knock-out stages in the spring, Saturday’s official Heineken Man-of-the-Match gave credit to the squad for the professional approach to the two games that saw the Ospreys run in 20 tries and scoring 130 points, while conceding only the one try and 10 points in 160 minutes of rugby.

“All you can do is play what’s on the field in front of you and that’s what we’ve done” Davies said.

“We haven’t worried about the opposition, we’ve been very thorough in our opposition, covered the detail and focused on our own game. That’s what you have to do every game, regardless of opposition. It doesn’t matter who you are playing, in terms of performance, it’s about consistency in everything you do.

“The first 15, 20 minutes on Saturday, we probably didn’t play as we wanted. In fairness to Grenoble, they showed some good heart and spirit and it looks like it was going to be a tough afternoon for us. The scoreboard reflected that pretty accurately.

“We managed to problem solve and got our stuff right on the pitch, and we got the job done.”

With 10 players absent last weekend through injury and some key players also sitting the game out as the coaches rotated the line-up, Davies highlighted the growing influence of the younger players in the squad as the Ospreys push forward on multiple fronts this season.

“You look at who’s not been involved on Saturday and you understand the kind of depth we are really starting to develop.

“Last season was bumpy at times, we didn’t start so well, but we’ve really benefited from the experience. Looking back at it, you’ve got young boys like Cracknell, Underhill, Nicky Smith, the list goes on, myself included, we’ve used those ups and downs positively.

“It’s good to see so much young talent coming through. We are going to need that kind of depth over the coming weeks and months if we want to kick on in Europe and in the PRO12.”

Europe is parked up now until mid January as the PRO12 returns and the Ospreys welcome their local rivals, the Scarlets, to the Liberty on Tuesday 27th December (3pm KO).

With the Ospreys in third place, with seven wins in 10 games, and the Scarlets just one place behind with an identical record having won seven PRO12 games on the bounce, it’s possibly the most eagerly awaited derby clash between the two teams ever.

Davies, who grew up watching his father, Nigel, playing and coaching for next week’s opponents, understands the rivalry better than most.

“The Ospreys versus Scarlets is always a massive event, wherever and whenever it’s played” he said.

“It means so much to the supporters. Both sides are playing good rugby and are on good runs, so hopefully we are going to have a big crowd out for some Christmas rugby.

“Both sides are in form going into but the reality is it’s not about who’s the best in-form team at the moment, it’s about who comes through at the end of the season in the higher position.

“That’s where our goal is set and that starts on the 27th with a big game here at the Liberty.” 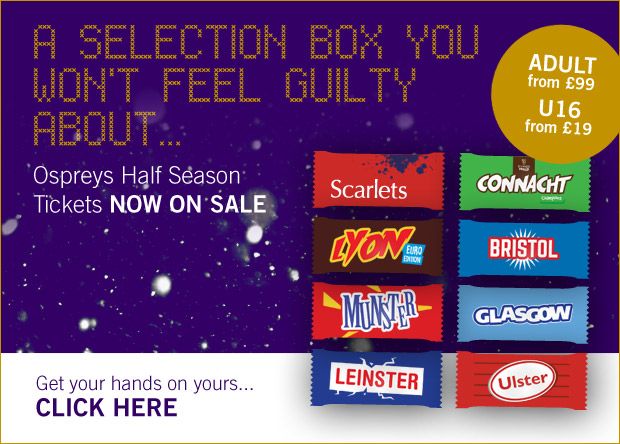