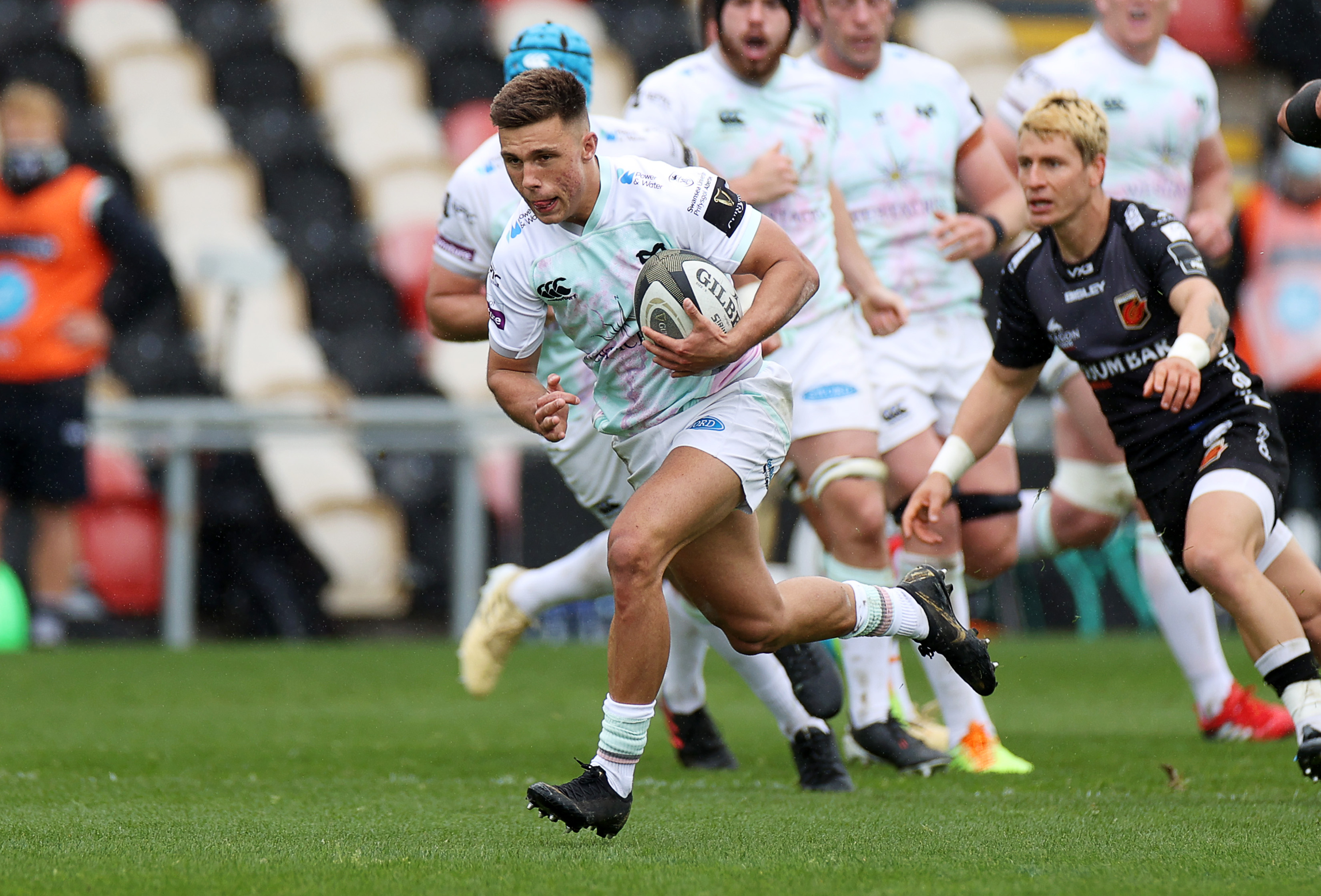 Ospreys wing Dewi Cross is one of the new generation of talented young players to come out of Pencoed – the rugby club and the town.

Given the community is made up of under 10,000 people, it’s perhaps no surprise that the 21-year-old counts Leicester Tigers’ Tommy Reffell and Scarlets’ Sam Costelow among his closest friends.

Cross’s parents wanted him to have a Welsh-language education, recognising the value of Cymraeg for many employers today, and so he went to Ysgol Llanhari. While he is a professional rugby player, he’s always kept one eye on a career outside of the game. He credits the WRPA, and its Ospreys rep Tim Jones, for helping him do just that.

“I qualified to be a Level 3 personal trainer last year,” says Cross, who entered the Ospreys academy at the same time as he moved to Neath College, aged 16. “I feel it’s important to get some qualifications behind me, and if it wasn’t for Covid I would have done a bit more, like courses in carpentry and a taster day with the fire service.”

His friends were the first to benefit from his newly-acquired status as a personal trainer when, like so many during lockdown, they needed some fitness inspiration. “Some of my mates were struggling to do sessions of their own, so I thought I’d put my qualification to good use and provide them with some workout ideas on Instagram.”

He may have made his senior Ospreys debut at the tender age of 18, but he was under no illusion that the appearance against Gloucester in the Anglo-Welsh Cup – or even his try-scoring show the following week against Bath – represented a fast-track to regular first team rugby. For one, there was a number of talented and more experienced back-three players at the region in front of him.

Rather than let a lack of game time at Ospreys get him down, in 2019 Cross embraced the opportunity to play for Bridgend in the Indigo Premiership. The Ravens proved to be just the tonic he needed: by the end of his spell at the Brewery Field, he’d received a host of accolades, including Players’ Player of the Year and Supporters’ Player of the Year. He was even voted in the club’s Ultimate XV since 2003.

“The season before I’d only played about four games for the Ospreys, and I hadn’t managed to get into the Wales Sevens programme,” he says. “I wasn’t enjoying my rugby at all and even debated whether or not to quit the game altogether. But I went to Bridgend and played week in, week out. I developed as a player, learnt when to run and when to kick, and things really kicked on from there. I thought, ‘I’m back to being me’ and really enjoyed it.”

The competition for places hadn’t disappeared by the time he returned to Llandarcy, but Cross had matured enough as a player to be part of it. “You realise that the competition with boys like George North and Keelan Giles is what’s so good about being in the Ospreys environment,” he says. “You can’t wait it out and expect anything to come your way: you have to work hard, aim to get better, match what they’re good at.”

Injuries to others have allowed him to get valuable game time this season. “I’ve been able to put my hand up and show what I can do. It can be frustrating when you’re not in the frame, you’re playing more of a background role, but in contrast when you get picked then the pressure is on. I thrive on pressure. Frustration is just a motivation to get better: if I’m not getting picked this week, I’m going to put my hand up to get picked next week.”

Dewi Cross
"You can’t wait it out and expect anything to come your way: you have to work hard, aim to get better, match what they’re good at.”

Cross has already worn the red of Wales at both U18 and U20 level. He came to the attention of many in the former, scoring in a memorable win against England at Ebbw Vale. He linked up with the U20s just one game into his senior rugby career, coming off the bench against New Zealand in the World Rugby U20 Championship in Perpignan. “The quickness of game at U20s is a lot higher than it is at regional rugby, and I learnt a lot,” he says. “Fast-tempo games are the ones I thrive off. Open games are my cup of tea!”

He’s had the support of his parents, Terry and Leanne, and elder brother Tomos every step of the way. “My dad and brother even drove up to Scotland one year to watch me play in the U20 Six Nations,” says Cross. “Fair play, I could never do that drive!”

For now, his sights are firmly set on making sure he remains in the frame for an Ospreys spot. It helps that head coach Toby Booth has an admirable track record in putting faith in youngsters, while Cross and attack coach Brock James seem to be reading the same rugby philosophy books.

“I learn a lot of things from Brock,” says Cross of the former Top 14 champion. “He’s helped me a lot through positional-specific skills and getting wingers involved in moves. He makes things easy to understand, which is helpful for a young player.

“Richard Fussell has played a huge part in my development too. I’d say the same thing about all the Ospreys coaches: they always make time for you and are willing to help in whatever way they can. Now it’s up to me to put my best foot forward and show they can trust me.”