The Ospreys moved to the top of the table as they continued the flying start to the new Guinness PRO12 season with a second consecutive bonus point win.

In a game that was far tighter than the final score line suggested, the Ospreys had to soak up an incredible amount of pressure either side of half-time, before pulling away with it in the final quarter, three tries inside the last 10 minutes not only sealing the win but securing five points.

Captain Rhys Webb led the way with two tries to become only the fourth player to score 30 for the Ospreys, while all-action Canadian duo Tyler Ardron and Jeff Hassler scored one apiece. Sam Davies defied the conditions to kick 12 points.

The Ospreys started brightly and were almost able to find a way through inside three minutes, Dan Evans carrying well before finding Webb up in support. The skipper for the night put through a grubber for Eli Walker to chase but it didn’t sit up for the winger, the ball going out for a Connacht throw close to their line.

The visitors were able to keep up the early pressure though and after Connacht were pinged for not rolling away, Davies made no mistake to give his side the lead with five minutes played.

Connacht should have hit straight back, the Ospreys penalised for a side entry as they tried to take the ball out of the 22 from the restart but with the Galway wind blowing across him, Jack Carty’s kick failed to find the target.

There was plenty of positive intent from the Ospreys in the early exchanges, combining the traditional up the jumper stuff from the pack usually required in Galway, with open, running rugby whenever the opportunity presented itself.

However, as the midway point of the half approached they had been unable to unlock the Connacht defence and a strong run up the left from Matt Healey took the home team deep into Ospreys territory where an offside presented Carty with a simple penalty in front of the posts and he made no mistake to level the scores.

The game settled back into the same pattern, the Ospreys probing through Davies and Webb, looking to find a way through, but on more than one occasion the ball was lost close to the Connacht line as the green wall held firm.

All the Ospreys pressure finally paid off as they grabbed the game’s opening try on the half hour mark, Ardron picking up at the back of a 5m scrum before giving it Webb who was able to force his way over from close range.

Davies’ conversion somehow managed to find the target, swirling in the wind, and the Ospreys led by seven.

Connacht were able to gain some territory as half-time approached, a series of powerful lineout drives forcing the Ospreys to defend for their lives, incurring the wrath of referee Ben Whitehouse on more than one occasion, before eventually winning a scrum on their own line.

Still Connacht looked to force something but somehow, not only did the Ospreys defence hold firm, their aggression eventually meant they were able to push Connacht back outside their 22 where they were awarded the scrum after great counter-rucking.

With 40 minutes on the clock and the Ospreys line somehow remaining intact Davies was able to put the ball out, allowing the team to head back to the shed with their noses in front.

The second kicked off as the first had ended, Connacht on the offensive, and they were able to cut the deficit to four in the 46th minute, Carty with the simplest of kicks.

It was all Connacht, the Ospreys struggling to get any respite as wave after wave of home pressure came at them. Seemingly every Ospreys tackle was met by a torrent of boos and penalty calls from the supporters in green and they eventually got what they wanted when Ardron was shown yellow for a high tackle on the 50 minutes.

After almost 20 minutes of constant pressure from Connacht, the try seemed inevitable and it eventually came just short of the hour, multiple phases of attack sucking in Ospreys defenders before it was swung out wide where they had a two man overlap, flanker Eoin McKeon eventually sauntering over to score.

Connacht led by a solitary point but the wind proved too much for Carty his conversion never looking like finding the target.

Having finally got some field position for the first time in the second half, the Ospreys were awarded a penalty when the scrum went down 25m out in a central position. Davies split the posts and put his team back in front, having trailed for just five minutes, Ardron returning to the field for the restart.

It couldn’t have been more delicately poised inside the final quarter of an hour and, having seemingly ridden out the storm, the Ospreys began to take a grip of the game once again.

The crucial score came in the 71st minute and it was that man Ardron who crashed over from close range after patient play from the forwards, inching their way towards the line with a series of pick and go’s. With the wind swirling around, Davies’ saw his conversion strike the inside of the near post and fall the wrong way, which meant that Connacht were just a converted try behind.

The victory was sealed with five minutes to go when, with Connacht pressing, Ben John took advantage of a turnover in his own half, racing upfield only to be caught in Connacht’s 22. Webb was up in support, collecting John’s pop pass off the floor to race in for his second, converted by Davies.

There was still time for the Ospreys to score that crucial fourth and, again, it came from a swift counter attack, Dan Evans breaking at pace before feeding Hassler who cruised past the cover to clinch the bonus point.

Davies’ boot rounded off a fantastic win that puts the team at the top of the formative PRO12 table as the Ospreys now switch focus to next Saturday night’s home game against Benetton Treviso. 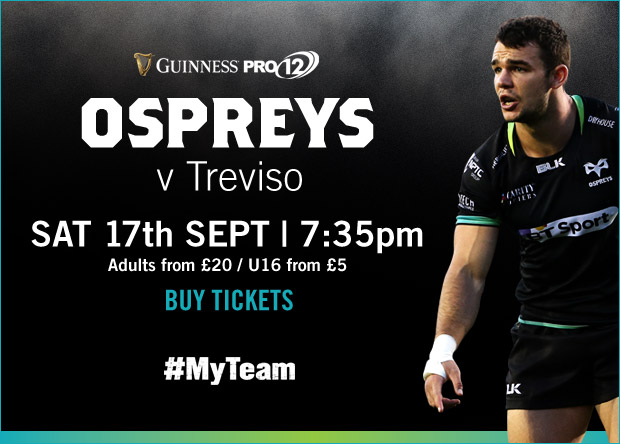