The Champions Cup returns this weekend when the Ospreys travel to Franklin’s Gardens on Saturday night to face Northampton Saints in the first leg of the double header.

The Ospreys go into the game after suffering two narrow losses in the opening rounds, against French champions Clermont Auvergne (21-26) and reigning European champions Saracens (34-36). 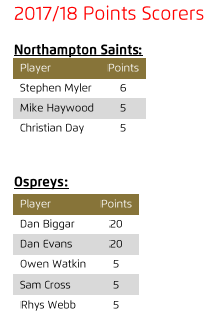