Champions Cup fate to be revealed

The Ospreys will discover their European Rugby Challenge Cup 2017/18 opponents this Thursday lunchtime, when the draw for next season takes place in Neuchatel, Switzerland.

A fourth placed Guinness PRO12 finish in 2016/17 not only secured a play-off semi-final against Munster, it also ensured a return to the top tier European competition for the Ospreys after missing out last season, and anticipation is growing at the Liberty Stadium ahead of the draw.

The Challenge Cup draw is due to start at 1pm (UK and Irish time), with the Champions Cup draw following at around 1.20pm.

Both draws will be streamed live on epcrugby.com, YouTube and the official tournament channels on Facebook, while we will be keeping you in touch with the draw via our official channels, bringing you full reaction from the camp once our opposition has been revealed.

Remember, whoever we play, admission to all three Ospreys home pool games in the Champions Cup is covered by a 2017/18 season membership. Memberships are currently on sale at the Liberty Stadium Ticket Office and online at www.ospreysrugby.com/buytickets, with prices starting from just £150. If you are an existing season member still to renew, you have until this Saturday, 10th June, to secure your existing seat, after which all seats are released on general sale and we cannot guarantee that your current seat will be available should you look to renew later.

The three domestic champions, ASM Clermont Auvergne (TOP 14), Exeter Chiefs (Premiership) and Scarlets (Guinness PRO12) will have pride of place in Tier 1, while the Champions Cup holders Saracens are currently sitting in Tier 2.

It’s not a straightforward procedure but the mechanics of the Champions Cup draw are as follows: 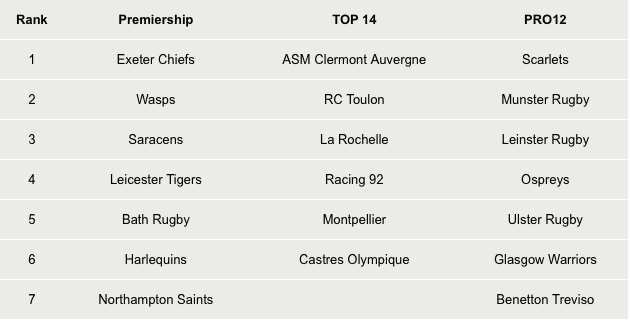 HOW THE TIERS ARE FILLED

Tier 1 will include the Premiership, PRO12 and TOP 14 champions.

Tier 1 will also include 2 of the 3 clubs ranked second from the three leagues. The 2 clubs will be decided by a draw.

Tier 2 will include 3 clubs which are ranked third from the three leagues.

Tier 3 will include the 2 clubs ranked fourth which are not in Tier 2.

Tier 3 will also include the 3 clubs which are ranked fifth from each league.

Tier 4 will include the 3 clubs which are ranked sixth in the leagues, as well as the Italian qualifier from the PRO12 - Benetton Rugby - and Northampton Saints who qualified as winners of the Champions Cup play-offs.

Only Tier 4 clubs are confirmed. A draw is made to establish the 5 Tier 1 clubs. Once Tier 1 is confirmed, Tiers 2 and 3 fall into place as per key principles.

The draw will determine which 2 clubs from the 3 clubs ranked number two in the leagues will join the three championship winners in Tier 1.

The three championship runners-up balls - Wasps, Munster and Toulon - are placed in the drum, and two clubs are then drawn into Tier 1.

Once Tier 1 clubs are established, the 5 Tier 2 clubs can be confirmed:

- PLUS the team not drawn into Tier 1

Plus (One of Leicester Tigers / Racing 92 / Ospreys)

Once Tier 2 clubs are established 5 Tier 3 clubs can be confirmed as follows:

Each of the 5 Tier 1 clubs are drawn, followed by a pool number for that club

Draw for the five Tier 2 clubs

Draw for the five Tier 3 clubs

As each club ball is selected, a draw is made to allocate the club a pool from available pools based on the key principles. Some clubs may have to be placed directly into a pool in order to ensure the key principles apply.

Draw for the five Tier 4 clubs

As each club ball is selected, a draw is made to allocate the club a pool from the available pools based on the key principles. Some clubs may have to be placed directly into a pool in order to ensure the key principles apply.