Take a look at what to expect in the European Rugby Challenge Cup this weekend.

With four bonus point wins from four games, the Ospreys sit at the top of Pool 2 with two games to play, knowing that any kind of win against Lyon at the Liberty Stadium this Sunday will secure them not just a place in the last eight, but a home quarter-final.

The Ospreys ran in four tries when they defeated Lyon 31-13 at Matmut Stadium in October, Keelan Giles with a hat-trick before replacement hookerm Sam Parry touched down at the death to clinch the bonus point. 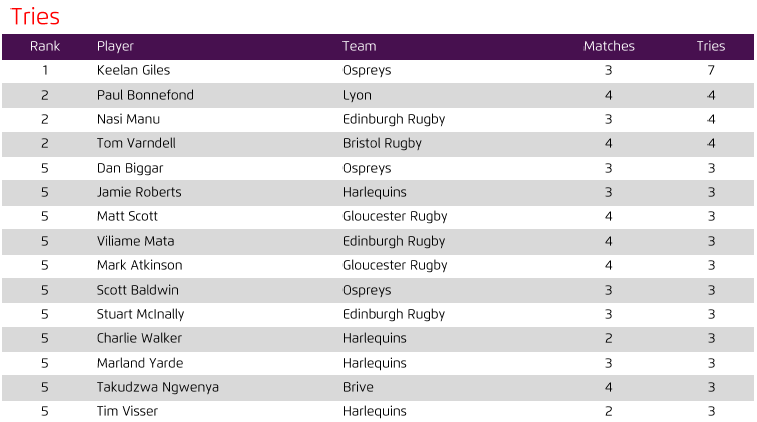 How clubs qualify for the quarter-finals

The five pool winners and the three best-placed runners-up qualify for the quarter-finals, and will be decided as follows:

(b) If two clubs in the same pool are equal on match points at the end of the pool stage, then their ranking will be determined by the results of the two matches played between the relevant clubs as follows:

(c) If ranking remains unresolved and/or if clubs have not played each other previously in the pool stage, qualification/ranking will be determined as follows:

NB The format for the semi-final matches in the Challenge Cup recognises performances by clubs during the pool stage as well as the achievement of winning a quarter-final match away from home.

The following clubs will have home stadium advantage in their respective semi-final matches:

If the clubs ranked 3 and 2 win their QFs, the club ranked 2 will have home advantage

If the clubs ranked 3 and 7 win their QFs, the club ranked 7 will have home advantage

If the clubs ranked 6 and 2 win their QFs, the club ranked 6 will have home advantage

If the clubs ranked 6 and 7 win their QFs, the club ranked 6 will have home advantage