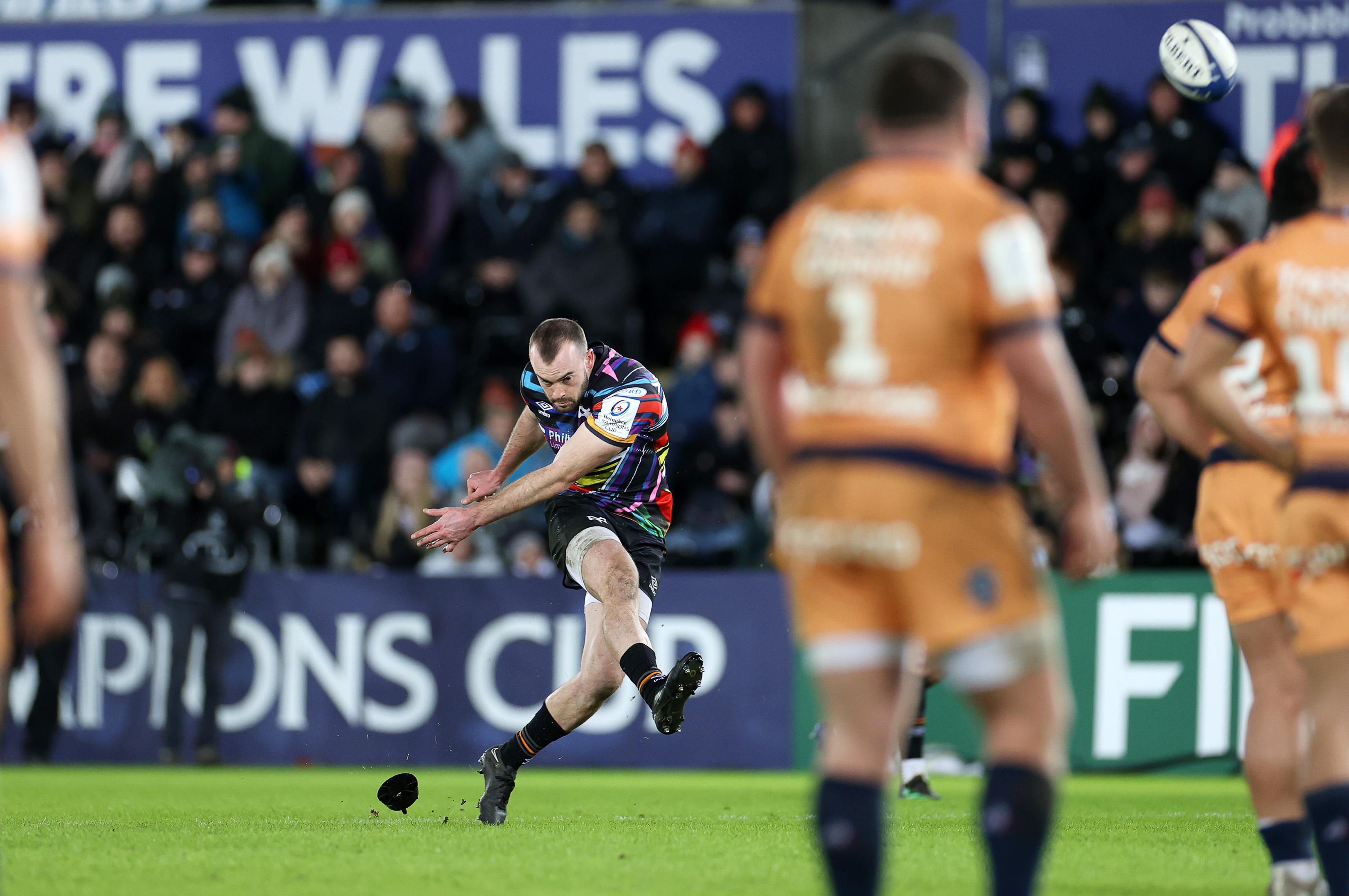 Cai’s kicks the difference as Ospreys do the double over Montpellier.

A physical battle saw the lead switch multiple times but Ospreys were able to come away with the win and complete a historic double over Montpellier Herault. What a game!

The first five minutes of this one were played mostly in the Ospreys’ half. Montpellier Herault had the first chance to score from a penalty, but Carbonel put it wide of the sticks.

The next five saw Ospreys come into the game, with some quality set plays allowing them to enjoy possession in Montpellier territory. As we hit the 20 minute mark the teams remained scoreless and we knew we'd be in for a close game.

Despite the lack of scoring, the game was heating up with both teams putting in some highlight reel hits. BOSH!

TRY FOR OSPREYS! Alex Cuthbert was through with the pick and go as he powered his way through the helpless Montpellier defence. Cai Evans converted, 7-0 Ospreys.

It didn’t take long for Montpellier to answer back with a try off their own, with Willemse powering his way through for the score. Carbonel missed the kick, 7-5 Ospreys.

A high tackle from Montpellier meant the Ospreys restored their lead soon after with a Cai Evans penalty going through the posts. 10-5 to the Ospreys.

Montpellier made the scores level again straight after as Willemse was able to go over again for the try, awarded after a TMO check on the grounding. Conversion missed by Coly, 10-10.

As the half time whistle drew nearer, Cai Evans was able to slot through another penalty to give Ospreys the lead again.

Play restarted, and there was Cai Evans again! The full back put another penalty through the middle, 16-10 Ospreys.

The penalty awoke Montpellier as they went over again for a try, with Bastian Lareau coming away with five points. Coly was able to convert this time, 17-16 Montpellier.

TRY FOR OSPREYS! A penalty allows them to pin the ball into the corner and a well worked set piece is finished clinically by Alex Cuthbert on the right touchline. Cai converts again from a tough angle, 23-17 Ospreys.

Montpellier took the lead soon after as a well worked set play gave them the overlap out wide. Thomas Darmon was able to finish on the right.

TRY OF THE SEASON CONTENDER FOR THE OSPREYS! A cross field kick from Justin Tipuric was recovered by Keelan Giles who grubbered it back infield, only for the man who started it all to scoop up the ball for the try. Cai converted, 30-24 Ospreys.

Montpellier scored again, Carbonel spotting a gap only to be stopped close to the line, but Ospreys couldn't prevent Cobus Reinach finishing. Montpellier missed the conversion as a spotty night of kicking continued, 30-29 Ospreys.

All to play for with eight minutes to go.

TRY FOR OSPREYS! Morgan Morris crashed over for the bonus point try after the Ospreys put the pressure on Montpellier. Cai finally missed a kick, Ospreys 35-29.

Montpellier broke through just before the end, but some quality play from George North at the breakdown won a final penalty an ended a game. WHAT A WIN!

Thank you to every single fan who stuck with us through the the late kick-off and turned up to cheer on the boys tonight. We couldn't have done it without you.