As the Guinness PRO12 moves to the business end of the season, the Ospreys face two of their rivals for a play-off spot during February and you can save money if you buy tickets for both.

After 13 games, the Ospreys are top of the PRO12 table on 49 points, three points ahead of Munster who have 46 points having played one game less.

The Irish province, who have lost just two championship games this season, visit the Liberty Stadium on Saturday 18th February for a 5.15pm KO.

Then, a week later, it is the turn of Glasgow Warriors to come to the home of the Ospreys. The Scots are currently in fourth spot, a further five points behind the Ospreys with 41, a single point ahead of the Scarlets in the table as they hold on to a play-off spot by the narrowest of margins.

The Ospreys v Glasgow match is on Sunday 26th February at 1.05pm. 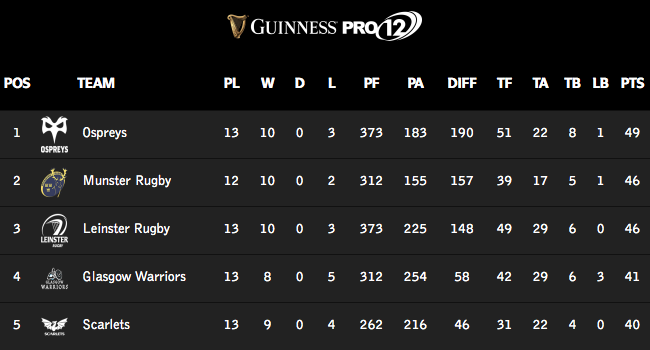 It’s a crunch period for the region, back to back games that could go a long way to shaping how the end of season play-offs look, and to ensure that the boys have the best possible backing for both games, we have introduced a great deal that provides unbeatable value:

“This is a huge four or five weeks for us with four PRO12 games coming up during the Six Nations period, two of which are home against two of our biggest PRO12 rivals.

“We need all the support we can get, to really push this young squad on during a tough month. It’s been an incredible season so far but we’ve won nothing yet. We have to keep performing and the boys have to deliver in these big games, so it’s important that everybody plays their part, on and off the field.

“We know that it’s an expensive time of year with international games as well as big PRO12 matches coming up so this deal makes supporting the Ospreys at this crucial time more affordable for everyone.”

All you need to do to benefit from the half price Glasgow ticket office is purchase a Munster ticket via www.ospreysrugby.com/buytickets , any type and any category, and that immediately makes you eligible. It’s as simple as that.

The system will update overnight and when you log into your account the following day, the half-price Glasgow ticket will automatically be available for you, allowing you to purchase at any time up until matchday.

To get your tickets now, please log in at www.ospreysrugby.com/buytickets now!