The Ospreys ran in six tries to secure a crucial Judgement Day win over the Blues that means they go into the final round of the Guinness PRO12 season still in contention for a top six finish.

It was a third consecutive bonus point win, following victories over the Dragons and Treviso, and they’ll be looking for similar next Saturday, against Ulster at the Liberty, while keeping an eye on affairs at Thomond Park, where Munster host the Scarlets at the same time.

The win sees the Ospreys leapfrogging the Blues and Edinburgh into seventh place, four points behind Munster in the sixth and final qualification spot with one game to play.

It was a real humdinger of a derby match that saw the lead change hands seven times, but the Ospreys had enough to come through late on, despite trailing on four separate occasions, to record a 10th straight win over the capital region.

Rhys Webb and Hanno Dirksen both scored two tries each while man of the match, James King, and Sam Underhill also touched down as they outscored the Blues six tries to two.

Despite the Ospreys making the brighter start and enjoying most of the possession and territory in the first 10 minutes, albeit without threatening the opposition line, it was the Blues who got the first points of the day. Gareth Anscombe slotted over a simple three pointer after Rhys Webb was penalised for not rolling away.

The Ospreys continued to enjoy the upper hand, spurning kickable penalties in pursuit of tries, but were guilty of losing possession every time they got close to the 22. Twice the lineout went wrong and on a further two occasions the Ospreys were penalised in front of the posts as Ellis Jenkins scavenged for the ball on the floor.

All that meant that the Ospreys remained three points behind at the mid point of the first half.

With 23 minutes gone Biggar again put his team up to the corner and this time, having taken clean ball from the line out, the pack were able to rumble forward, but it was that man Jenkins who got involved to disrupt the drive again.

The first try eventually came just two minutes later, King picking up at the back of the scrum and going through a huge gap in the Blues defence, shrugging off the efforts of Josh Navidi to score.

Biggar’s conversion was good but the Blues came straight back at the Ospreys, Tom Isaacs with the initial burst through the middle, stopped by Dan Evans, before Rey Lee-Lo looked set to find a way though on the right, beating Jonathan Spratt, only for an Owen Watkin ankle tap to bring him down.

A penalty against Dmitri Arhip at a ruck then gave Anscombe another shot at goal and he made no mistake, bringing the Blues back to within a point after half an hour.

It was the Blues who were now controlling things and Anscombe made it three from three in the 37th minute to put his team back in front, a lead they held when the two teams went down the tunnel shortly after. 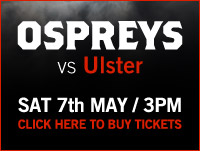 It was the worst possible start to the second half for the Ospreys, Aled Summerhill grabbing the first Blues try within two minutes. Olly Cracknell was caught in possession inside the 22 and the Blues took full advantage. First it was former Osprey Isaacs who was stopped inches short before Anscombe was alert to his winger hugging the touchline and sent a long pass out wide to give Summerhill a simple run-in.

Having enjoyed a perfect first 40 with the boot, this time Anscombe sliced his kick horribly wide, which meant the Blues led by seven.

A scrum penalty then allowed Anscombe to extend the lead in the 47th minute.

The Ospreys weren’t ready to throw the towel in though, and they grabbed their second try seven minutes later. A much better scrum had the Blues in trouble on their line and, after Aaron Jarvis was brought down by Lee-Lo, a wonderful through the legs pass from Rynier Bernardo sent Dirksen over in the corner, the try going unconverted.

Just five minutes later it was Dirksen crossing the whitewash again as the Ospreys snatched the lead. Watkin was the initial catalyst, pouncing on a loose ball inside his own half, carrying to the Blues 10m line. The Blues defence were able to slow it down and there appeared little danger when Webb sent a little dink towards the corner, but the bounce beat Isaacs and great chasing from Watkin saw him snaffle the ball and his quick offload  allowed Dirksen to finish it off.

The game was opening up as both sides went in search of the win they needed and, after Biggar had converted to put the Ospreys back in front, the lead changed hands once again as Josh Navidi broke through from 25m to score, shrugging off the tackles of Bernardo and Evans. Anscombe’s conversion meant the Blues lead 24-19 with a little over 15 minutes to play.

An incredible second half took another dramatic turn in the 70th minute when Sam Underhill powered over from just three metres out, taking Webb’s short pass and carrying Kristian Dacey across the line with him. Biggar put the extras over and the Ospreys, with a try bonus in the bag, led by two with 10 minutes to play.

However, there was a lengthy delay before play could continue as big second row Adam Beard received treatment before being carried from the field. With the Ospreys’ second and back row replacements already on, it meant that Sam Parry entered the action at flanker, with King moving up, and Parry’s first involvement was to concede a penalty at the restart for blocking, allowing Anscombe to put the Blues back in front the scoreboard showing 27-26.

With both sides emptying their benches the Ospreys piled on the pressure in the closing stages and, incredibly, they were able to secure the win and deny the Blues even a losing bonus point as Webb twice sniped over from close range in the dying minutes, including an NFL style dive over the top of a ruck in the corner, Biggar adding the extras both times to round off a big win. 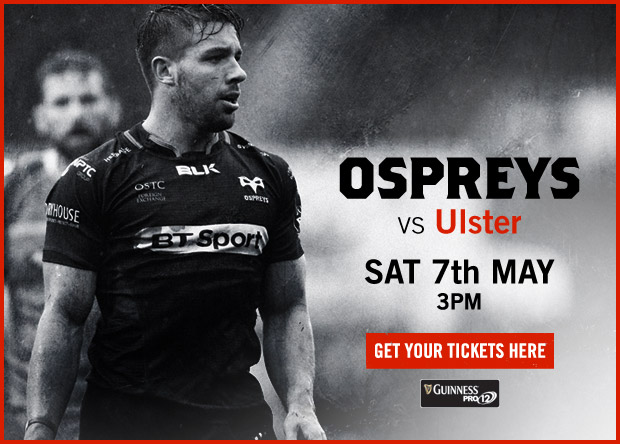