Ospreys and Wales fly-half Dan Biggar has become the first player to re-sign a National Dual Contract (NDC) after committing his future to his region and Wales.

The 26-year-old, who starred for Wales at the Rugby World Cup, has signed a new NDC, which will see him remain at his home-town region, with an option through until the 2019 RWC.

Biggar, who signed his initial NDC back in March 2015, has put pen to paper on a new long-term deal to become the first of the 17 National Dual Contracted players to re-sign.

The Group Chief Executive of the WRU, Martyn Phillips, said: “We are delighted Dan has committed his future to the Ospreys and will be remaining in Wales.

“It is another landmark moment for National Dual Contracts in Wales as Dan becomes the first player to re-sign a deal and it is evidence of our close working relationship with the Region to ensure our top players remain in Wales.”

Dan Biggar said: “It’s taken a little while to get to the point where everyone is happy with the deal, but I’m glad to have the next couple of years sorted and I can continue to play for Wales and, week in, week out, for the Ospreys. Hopefully others will follow suit and we can continue to grow a strong player base in Wales.” 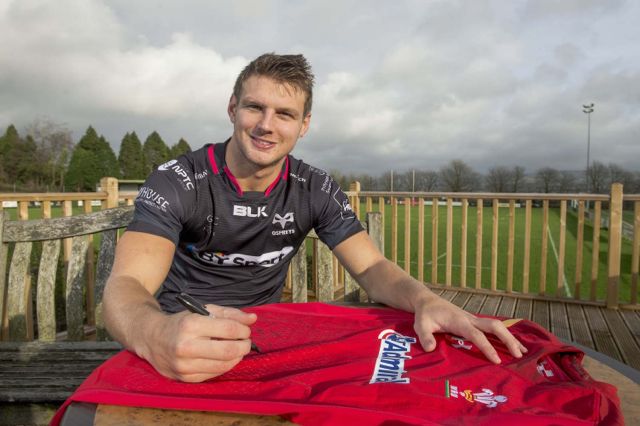 Andrew Millward, Rugby General Manager at the Ospreys said: “This is great news for the Ospreys, and for Welsh rugby. Development from within is at the heart of everything we do at the region and Dan is Ospreys born and bred, proud to represent his home region, as everybody knows.  He has been a consistent performer for the region, year in, year out, and has now taken that form into the national squad with some standout performances during 2015.

“To have secured his services on a new NDC is a significant landmark that sends out a strong message about our business and the working relationship we have with the WRU.”

The National Dual Contract structure has been agreed by the WRU and the four Regions under the terms of their joint Rugby Services Agreement in order to keep the best playing talent in Wales playing for one of the four professional Welsh teams.

A product of the Ospreys’ elite youth development pathway, Biggar gained his early rugby experience with Gorseinon RFC and Gowerton Comprehensive in Swansea, before representing the region at age-grade level and playing for Swansea RFC in the Welsh Premiership.

He made his senior Ospreys debut as an 18-year old, as a late replacement in an EDF Energy Cup semi-final win over Saracens at the Millennium Stadium almost exactly five years ago in March 2008, with his first start coming in an away win over Glasgow in September that year.

Since then he has flourished in the Ospreys environment, his durability and consistency in the number 10 shirt allowing him to reach some considerable landmarks for the region.

In November 2011, less than a month after his 22nd birthday, he overtook James Hook to become the all-time highest points scorer, a record he has since extended to 1,812. He has topped the scoring charts for the region in each of the last six seasons he is on course to do so again this time around.

Meanwhile, in April 2012 he became the youngest ever Osprey to reach 100 regional caps, and now stands on 174 appearances.

An age-grade international, he won his first senior Welsh cap in November 2008, against Canada, and is now firmly established as first choice for Wales with 209 points from 39 appearances.