The Ospreys fell to a third consecutive Guinness PRO14 defeat as their hosts led from the second minute.

It was the worst possible start for the Ospreys who were trailing inside 90 seconds.

There seemed little danger, Treviso with a lineout close to halfway, but winger Luca Sperandio carved his way right through the heart of the Ospreys defence, only a last ditch tackle from Dan Evans halting his progress close to the line. However, Treviso support was there in numbers and blindside Francesco Minto was able to burrow over from close range, Ian McKinley with the extras.

The Ospreys were on the board themselves shortly afterwards though, good work on the Treviso 22 forcing a knock-on and after winning a penalty at the first scrum of the evening Dan Biggar split the posts for a straightforward three points.

Mckinley then took the lead back up to seven with 10 minutes played, his kick from 42m out scraping the bar on the way over after Treviso did a job on the Ospreys eight at the next scrum.

There was a setback on 15 minutes when Biggar exited the action after taking a blow in contact, gingerly walking off the field holding his lower back to be replaced by Sam Davies.

The visitors were then guilty of creating problems for themselves, Dan Evans putting the ball out on the full having taken the pass inside his 22 from Jeff Hassler yards outside it. With Treviso having the lineout in dangerous territory, a Minto charge almost took him through for a second.

Although the defence held firm on this occasion play was brought back for a Treviso penalty and the Ospreys thought they had got away with it when McKinley screwed his kick onto the outside of the near post. However, referee George Clancy ordered a retake and this time the Treviso player made no mistake.

Keelan Giles was looking a threat every time he had the ball, two eye-catching runs giving the Ospreys some much needed go forward. The second of which led to a penalty and a yellow card to Jayden Hayward for killing the ball as Treviso scrambled to cover. Davies was successful with the three pointer to bring up the half hour.

As the break approached the Ospreys were enjoying plenty of ball but were struggling to make any real headway against the 14 men and a long miss-pass from Rhys Webb that floated over the head of Scott Baldwin and high into touch, with the 40 minutes up, brought the first half to a close in a fitting manner.

The Ospreys needed a positive start to the second period.

Half breaks from Davies and Ben John took them into the Treviso 22, Webb sniped dangerously and, awarded a penalty in the corner, they went for a lineout. The maul inched its way forward but, unfortunately, as Tipuric looked to tidy things up and go for the line the ball was lost forward.

The third quarter was all being played in the Treviso half as the Ospreys took control, going through plenty of phases without ever looking like threatening the line, one Tipuric juggle aside.

As the hour clocked up the Ospreys were getting closer and one passage of play saw them pound on the line without success. First John and then Evans danced their way through tackles to go close before Hassler was ruled held up as he looked to force his way over.

From the resulting scrum the Ospreys went again and it looked like they had scored under the posts when the returning Alun Wyn Jones dived over the ruck to ground it but Mr Clancy referred it upstairs and in consultation with the TMO ruled out the score, allowing the Italians to clear from their own line.

The pressure from the Ospreys was now incessant, wave after wave of attack in and around the Treviso 22, and it seemed that the score was inevitable.

However, the home defence stayed resolute, and the Ospreys frustration became evident when Kieron Fonotia tried a little grubber that never looked like the right option and Treviso were able to hack the ball all the way up into the Ospreys 22, finding themselves in the right area with just 10 to go.

As much as they huffed and puffed the Ospreys were unable to get themselves into a position where they could force the score as the final whistle approached. It got worse late on as Treviso denied the Ospreys even a losing bonus point, a late penalty from Marty Banks in front of the posts taking them 10 clear.

The Ospreys now depart Italy on Saturday evening, heading to South Africa for the first time where they face Cheetahs in Bloemfontein on Friday night. 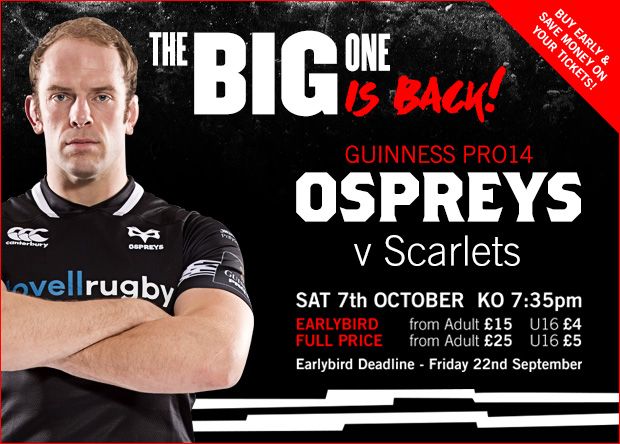