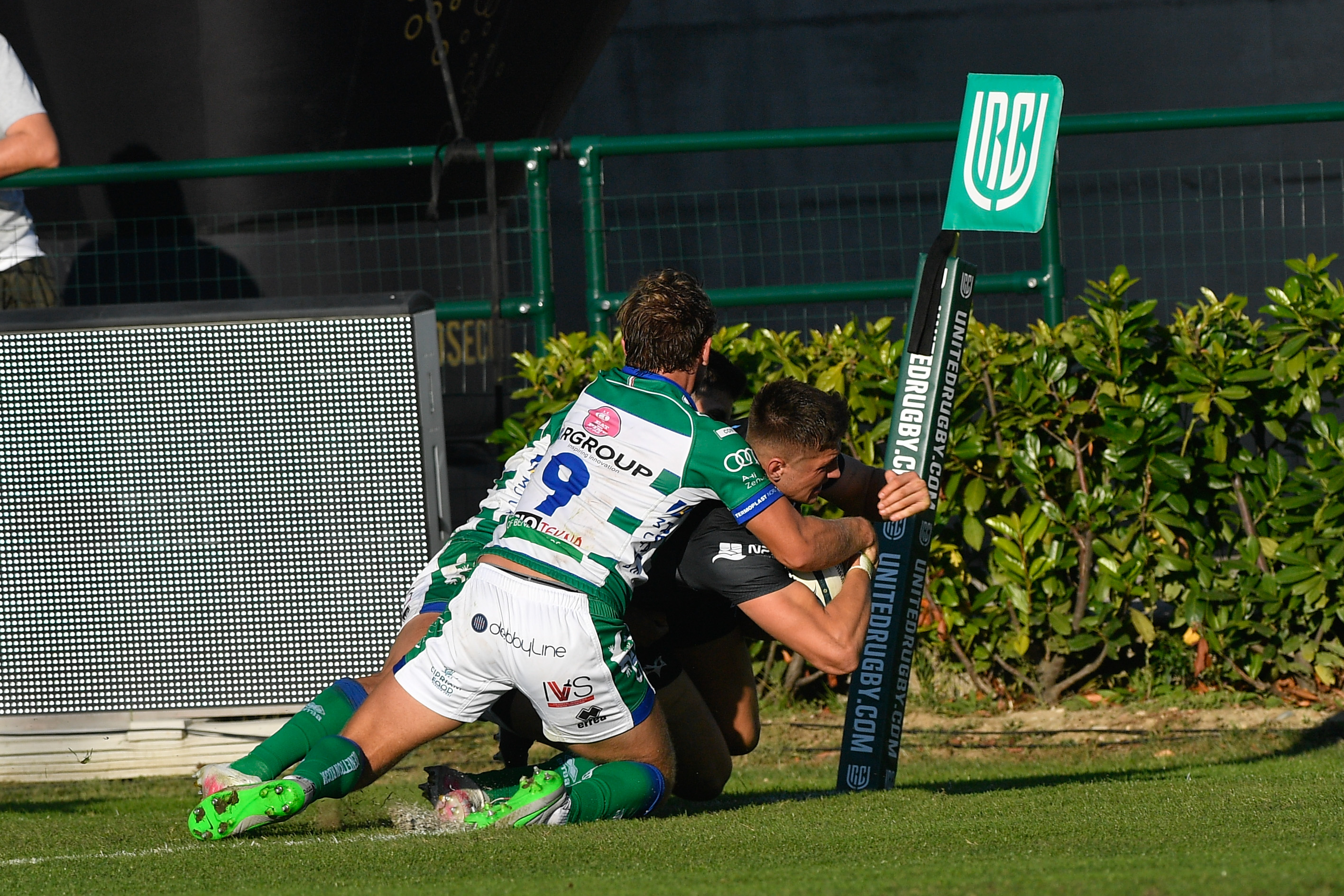 It was a crisp clear day out in Treviso for the Ospreys second away game of the season; head coach Toby Booth rotated his squad with the team looking to make amends following last week’s loss to the Cell C Sharks. It was a last opportunity for Rhodri Jones, Tomas Francis, and Alun Wyn Jones to pull on the black jersey before they joined the Welsh camp; while Alex Cuthbert was donning the Ospreys kit for the first time against the Italians.

It was a disappointing start to the game for the visitors as they conceded a try in the opening minutes. Benetton hooker Gianmarco Lucchesi claimed the five pointer and the conversion added by Tomas Albornoz. It would have been a difficult half hour for Ospreys supporters as Benetton seemed to have the Ospreys under wraps. However, a momentum shifting intervention through Ospreys centre Owen Watkin ignited a fierce attack down the left wing, finished off by fullback Max Nagy who had plenty of work to do to get the ball to ground.

The visitors found their momentum after that score and a line-break from Ospreys scrumhalf and captain Rhys Webb, followed by a sublime reverse flip pass to number eight Ethan Roots, led to the second try for the boys in black. Outside half Stephen Myler converted the second try, making up for his first miss from out wide and giving the Ospreys a 7-12 lead at the interval.

The Ospreys came out after the break with a renewed fire about them, scoring two tries through captain Webb and securing a bonus point. However, things went downhill for the Ospreys after that as Benetton crossed for two of their own through Rhyno Smith and Monty Ioane, followed by a yellow card for Alex Cuthbert. A fourth try was scored by Benetton’s other winger Tommaso Menoncello, and the conversion meant that with ten minutes left on the clock, the game was level at 26-all.

However, calm heads prevailed and the experience of lock Alun Wyn Jones and outside half Myler, along with energetic injections from youthful replacements Reuben Morgan-Williams and Morgan Morris, granted the Ospreys an opportunity to take the lead which they took with both hands (or more accurately, the boot of Myler).

The visitors successfully managed the final minutes of the game and saw out the clock to secure an important and hard fought victory over the reigning Rainbow Cup champions.

An important victory on the road for the Ospreys.

Next up, we face the might of Munster at the Swansea.com Stadium on Saturday 23 October, KO 19:35.

Help us turn the stadium into a fortress and get your tickets to the game today!

Benetton applied early pressure onto the Ospreys line, monopolising the territory and possession. And they reaped their reward only five minutes into the game through Benetton’s hooker Lucchesi, scrambling over the line for the first try of the evening and followed up with a conversion from outside half Albornoz.

Things went from bad to worse for the Ospreys as speedy wing Luke Morgan was shown a yellow card for what was deemed a deliberate knock-on. From that penalty, Benetton capitalised once again ill-discipline to find themselves just five metres out once more. The penalty count began to mount against the visitors as referee Aimee Barrett-Theron repeatedly pinged the Ospreys for a variety of offenses.

It looked as if Benetton winger Monty Ioane had gotten in at the corner, but an outstanding effort from Ospreys debutant Alex Cuthbert denied the opportunity and Ospreys cleared their lines.

The Ospreys finally got a foothold in the game after half an hour. A thunderous carry from Ospreys centre Owen Watkin in the midfield took play behind Benetton’s defensive line and quick hands released left wing Morgan along the touch line. An inside offload found fullback Nagy in support and the athletic youngster barrelled over for Ospreys’ first try of the game.

Moments later, more physical carries and aggressive counter rucking rocked the Italians. A quick snipe around the edge of the ruck from Webb and the scrumhalf was in open space with Benetton defenders closing in on him. A deft reverse offload to number eight Roots and the big man ran in unopposed to score his first URC and Ospreys try.

The Ospreys had their tails up in the dying moments of the half and another cavalry charge into the ruck yielded another turnover, and a last throw of the dice from the Ospreys came within a hair’s breadth of scoring a third as Luke Morgan looked to have grounded the ball in-goal after haring after Myler’s threaded through ball. Alas, Benetton did well to get to the bouncing ball first and the half ended with the Ospreys in the lead 7-12.

The Ospreys picked up the second half where they’d left the first, with a try from nowhere. The restart from Benetton went into touch and from the resulting scrum, scrumhalf Webb popped to Watkin who again busted through the middle and returned the ball to the Ospreys scrumhalf who had a clear run in to the try line. Myler added the extras and the Ospreys found themselves 12 points ahead after a few minutes.

The Ospreys attack was relentless, and a counter attack sparked off by Webb released Morgan down the left wing again. The visitors swallowed up the territory with carry after carry before Webb himself got to the try line from the base of the ruck. Myler converted the fourth try and the Ospreys secured a bonus point within ten minutes of the second half.

However, the game still hung in the balance as Benetton looked dangerous with ball in hand and they showed their threat only moments later as replacement outside half Smith chipped over the defence and regathered to score an excellent solo try.

It was Benetton who came again through winger Ioane who wrong footed the defence down the left wing and scored an almost length of the field try, bringing his side back to within seven points with twenty minutes still to play.

Winger Cuthbert was shown a yellow for a high tackle and the 14-man Ospreys had to defend for their lives with fifteen minutes to go as Benetton set up camp on their 5m line. It wasn’t enough though, as Benetton’s other wing Menoncello got over in the corner for their fourth try of the afternoon. The conversion from Coetzee meant that with a little over ten minutes left to play, things were all square at 26-all.

Outside half Myler hooked an attempt at goal with ten minutes to go, and six minutes later he lined up another shot at goal and this time the ball held its line and the Ospreys took the lead with three minutes left on the clock.

Good game management in the final moments of the game from the Ospreys allowed them to protect their narrow lead, and the ball was thumped into touch by Myler at the 80th minute and the game was won.

A nervy but important bonus point victory for the Ospreys on the road.