The Ospreys continued their build-up to the new Guinness PRO12 season with a convincing win for a youthful team against Belgium at Stade du Pachy in Waterloo.

They ran in 11 tries, with hat-tricks for 20-year olds Joe Thomas and Tom Williams, as well as 18-year old, Keelan Giles, while Hugh Gustafson and Dafydd Howells also crossed the line for the visitors, who racked up 57 points in the first half. 20-year old fly-half, Luke Price, converted eight of the tries.

It was Belgium who had the first opportunities to get the scoreboard moving, captain Florian Piron putting an intelligent kick behind the Ospreys defence, the bounce causing Howells problems, before Williams got back to tidy up close to his own line, winning a penalty in the process.

Then Piron was off target with a penalty in front of the posts after a side entry, but that was as good as it got for the Belgians as the Ospreys took control.

The games was only six minutes old when winger Giles crossed in the corner for the first try after the skipper Jonathan Spratt and Howells combined to put him in. The angle of the kick from the left hand touchline proved to much for Price, but he made no mistake with an easier kick just a couple of minutes later after try number two, Thomas going under the posts for his first after great work through hands, Tom Williams carrying well up the right and Justin Tipuric supplying the final pass.

Try number three came after just 13 minutes, a lineout drive on the left powering over, with Gustafson coming up with the ball. Price added the extras and the scoreboard read 0-19.

The next score, on 20 minutes, came from a similar position, a lineout on the left. On this occasion though it was Tipuric running a great angle before the ball moved through hands, Thomas eventually going over for his second.

The Ospreys were proving to be extremely clinical, taking every opportunity that came their way, and just a couple of minutes later, Williams finished with style in the corner despite a great hit from the Belgium defender after the ball had been moved swiftly along the line, the touch judge confirming the grounding to keep the scoreboard moving.

Just before the half hour mark, the impressive Thomas beat two men before feeding Howells, who hit the line at pace, and the Wales international raced though for a try that went unconverted.

Seven minutes before half-time, Giles grabbed his second with a spectacular run from inside his own half, sidestepping his way to the line, touching down under the posts.

Thomas then matched Giles’ efforts, straight from restart, going all the way from his own 22. Price converted both tries, taking the score up to half a century.

Giles was then denied hat-trick after making a great run up the wing, only to be pulled down metres short, before the ball went forward as he tried to offload to Howells.

Tom Williams rounded off an impressive 40 minutes with his second of the evening from the last play, after good work by Thomas, converted by Price.

With the coaches ringing the changes to give more players game time, and the rain starting to fall for the first time all week, the second half was a far more disjointed affair, the Ospreys continuing to control affairs but on more than one occasion unable to make that final pass stick.

However, they were able to add two more tries, Giles completing his hat-trick after being freed by Rob McCusker, converted by Price, before Williams completed the scoring with his third, just short of the hour, rounding off some good hands along the line.

Price’s eighth two-pointer took his team passed 70 as the game drifted away in the Waterloo drizzle, bringing a positive end to a good week in camp for the Ospreys.

Next up for the Ospreys is a trip to Welford Road next Friday to face Leicester, before they welcome Zebre to the Liberty Stadium a fortnight today in the opening Guinness PRO12 game of 2016/17. 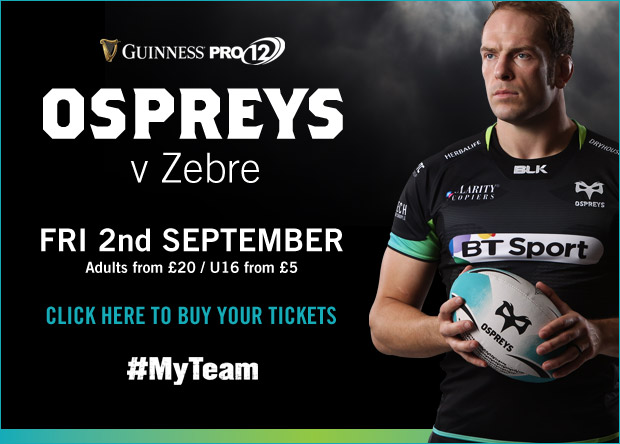