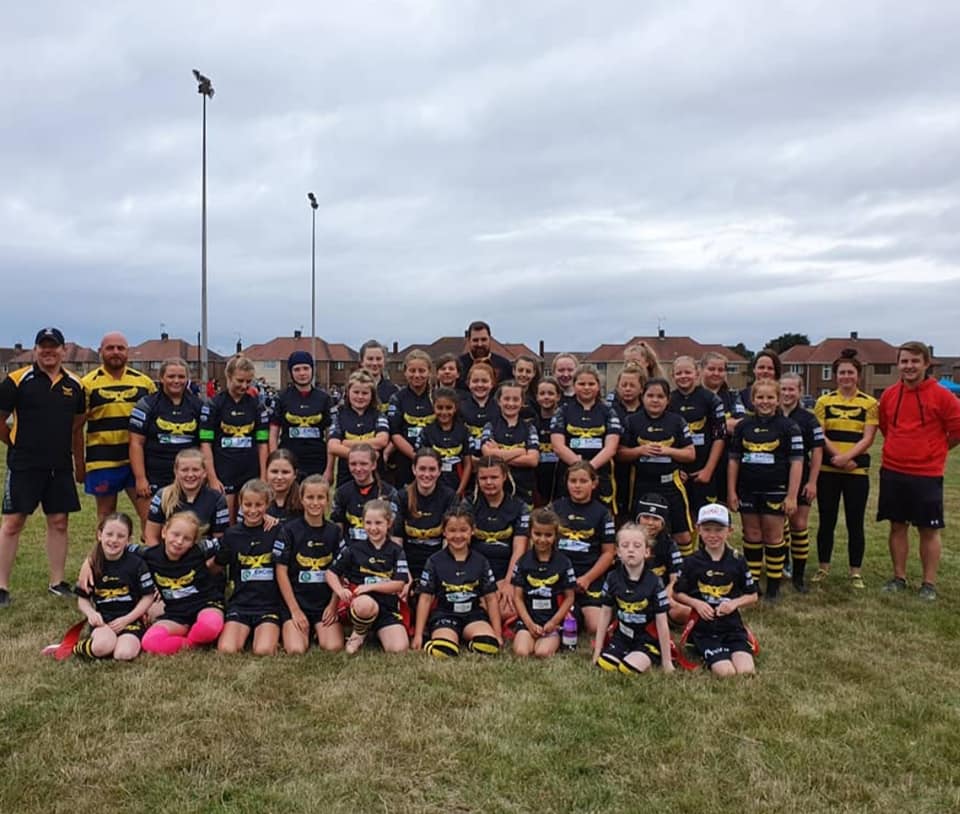 Around the Community - West Swansea Hawks

Before Coronavirus put a stop to rugby across the country, women and girls rugby in Wales was thriving. No more so than Gowerton based girls hub, West Swansea Hawks. We caught up with Dave Graham-Woollard, the Hub Lead, to see how they were doing.

“We were preparing really well, we had lots of things already in the pipeline and had more coaches in place than ever before. What was really encouraging for us was the number of girls that had already started working hard ahead of the new season. We had a lot of the U15s and U18s coming through as coaches. They were so enthusiastic, and the younger girls loved the fact the older girls were coming into coach them.”

West Swansea Hawks was established back in the summer of 2016 where they originally had around 20 girls sign up. Since then, the hub has gone from strength to strength with over 100 girls involved. The club’s primary aim is to foster, grow and support a sustainable pathway for girls’ rugby in the area, which was developed one year ago, along with the Pontarddulais and Gorseinon Senior Womens teams, with the launch of the senior side, West Swansea Hawks Ladies.

Unfortunately, Covid-19 brought everyone’s season to halt, which gave the side a chance to reflect on the past few months.

“From a senior’s perspective, the Ladies team were doing really well. They were getting used to the new structure and the way the points were being awarded but they were enjoying playing in proper games. It’s well-driven by the girls themselves and they work on their own development."

Dave Graham-Woollard, Hub Lead, West Swansea Hawks
"The numbers we’re seeing coming through the pathway on a junior level is really encouraging. We had just started registration before lockdown and the numbers were up on last year.”

Whilst they can’t be together on the field right now, the side are carrying on the team spirit.

“We’re all doing ok, we’re providing that mutual support for one another. The coaches have been superb in setting weekly challenges to keep the girls all engaged across the board. Everyone just wants to get back out there playing! I think the kids are finding it tough being apart from their teammates and missing that social interaction, but it’s been very positive throughout the team. We’ve got a really good bunch of girls and coaches here – we’re spoilt!

“A personal highlight for me this season has been seeing the initiative of the girls themselves. Not just during the lockdown but during the season also. As coaches, we try and come up with new ideas to keep them engaged, but the things the girls come up with themselves is great and shows we have leaders coming through our own system.

“They’ve shown themselves to be superb not just for themselves but for others. We talk about legacy as a coaching group and our aim is to have a big women’s and girls rugby scene in this area under the Hawks banner which is being run by the girls and we’re really starting to see that now.”

“We have a few girls really stepping up including, Charlotte started the process a couple of years ago getting her level 1 WRU coaching qualification, Paige achieving hers last year and now we have Molly, Ffion and Keira all looking to do the same and we have a couple of trailblazers coming through."

Dave Graham-Woollard, Hub Lead, West Swansea Hawks
"It’s awesome to see the girls themselves stepping up and showing us all what they can do and what they’re made of!”

Away from the pitch, West Swansea Hawks have been dominating social media with various challenges, Tik Toks and updates to ensure the team as well as their followers are kept entertained and informed.

“We have one of the best social media officers in the world. Justine goes above and beyond and really drives that side of things for us. She shares everything about the girls and anything relevant to women and girls rugby which will spark some interest she’ll reshare it. She does everything she can to promote the brand and showcase the team, she loves it and does a fabulous job!”