Alun Wyn Jones was back at the Liberty Stadium on Thursday evening to launch his Testimonial season, recognising his outstanding service to his home region.

Having only returned to the UK 24 hours earlier from his record breaking involvement in the British & Irish Lions tour of New Zealand, he was joined by family, friends, business colleagues and some of the biggest names from the Ospreys history to kick-off the year.

The third most capped Osprey of all time paid thanks to Mumbles RFC, Bonymaen RFC, Swansea University and Swansea RFC for their part in his development.

He also revealed Swansea based Forget Me Not Dementia Day Clubs and  Golau Cancer Foundation as the official charities of his Testimonial year.

“When I played my first game for the Ospreys, at the Liberty Stadium in August 2005, I could never have imagined that I’d still be here 12 years later” said Jones.

“I’m honoured to have been able to represent my home region for so long, and that they still want me here to be honest. I’m extremely grateful to the Ospreys Supporters Club who have made this Testimonial year possible, allowing me to help two outstanding causes that are very close to my family’s hearts.” 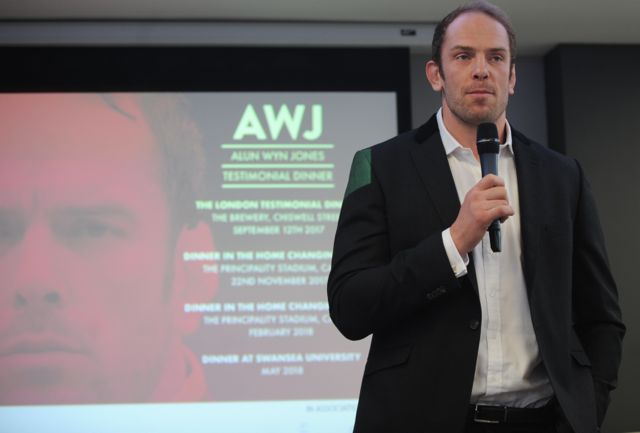 “Everybody involved with the OSC is delighted to be able to help celebrate the career of an outstanding Osprey, someone who has served the region and his country with such honour. We look forward to working closely with him over the coming season.”

“Alun Wyn is someone who wears his heart on his sleeve and everybody knows how much the Ospreys, his home region, means to him. Having received the request from the OSC to honour his commitment and dedication to the cause, we had absolutely no hesitation and wish him a successful year.”

Any queries relating to Alun Wyn’s Testimonial year should be directed to awj@ostc.com

Alun Wyn and the Ospreys – in summary

99 – The number of games he has captained the Ospreys

21 tries scored – The second highest by a forward