20 years of an iconic stadium

With the Principality Stadium celebrating its 20th Birthday this week, we took a look back at some of our most memorable moments at the home of Welsh rugby.

Since the Region played at the Principality Stadium for the first time more than 12 years ago, the Ospreys have built up an impressive record at the home of Welsh rugby, winning eight from 10.

We’ve rounded up some of our key games at the venue to help you relive some of our greatest moments at the stadium – check out the guide below….

Sonny Parker and Lee Byrne scored a try apiece, with James Hook kicking 17 points (4P, 1DG and 1C) as the Ospreys eased their way towards a first ever Twickenham appearance in the Anglo-Welsh final, against Leicester Tigers.

The Ospreys controlled the contest throughout, Blues indiscipline leading to three first half yellow cards and the two tries both coming with the Cardiff region a man short.

An intriguing subplot saw Ospreys scrum-half, Justin Marshall, winning the man of the match award up against Welsh international, Mike Phillips, ahead of his move to the Liberty the following summer. 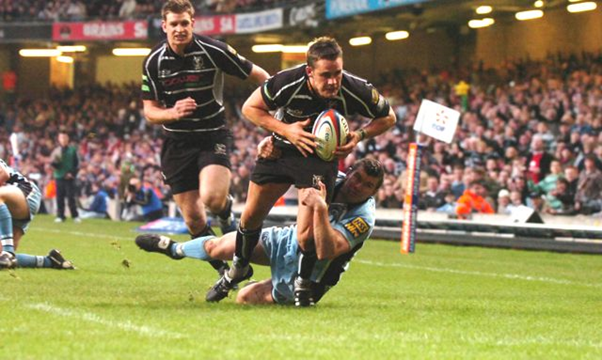 The Ospreys booked a second consecutive final against Leicester, eventually overcoming stern resistance to blow away Saracens in the second half.

Just a week after Wales had defeated France to clinch the Grand Slam at the same venue, the region’s international contingent were at the fore, Shane Williams with a brace of tries and man of the match, Gavin Henson, also touching down. Filo Tiatia also barged his way over to score, James Hook successfully kicking two conversions and two penalties.

An 18-year old Dan Biggar made his Ospreys debut as a late replacement for Hook. 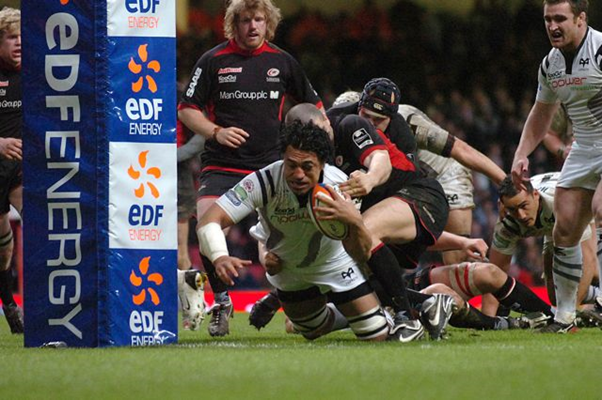 The first ever regional double header at the national stadium saw the Ospreys secure a victory that was rarely in doubt, without kicking on to secure the bonus point their dominance deserved.

Trailing 7-0 inside as many minutes though a Leigh Halfpenny try and conversion, the Ospreys led by 10 at the break (10-20) after James King and Jonathan Spratt had crossed.

They failed to build on that lead in stodgy second half, with only a Biggar penalty to show for their efforts, taking his tally for the afternoon to 13, but the Blues were unable to force their way back into the game. 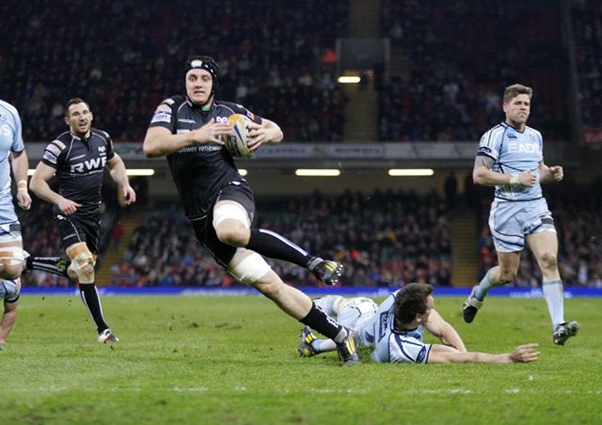 In a strange game which saw the Ospreys enjoy 60% possession and 70% territory, the two teams went in even at half-time with neither side troubling the scorers.

It was the Dragons who struck first after the restart, albeit against the run of play through former Osprey, scrum-half Richie Rees, as they caught the opposition defence napping.

The Ospreys were trailing inside the final quarter, eventually gaining the reward they deserved thanks to a Tom Habberfield close range snipe, although the game wasn’t made safe until the final 90 seconds, a penalty try award against the Dragons scrum, Biggar also adding 10 points to the scoreboard with his boot in the second half. 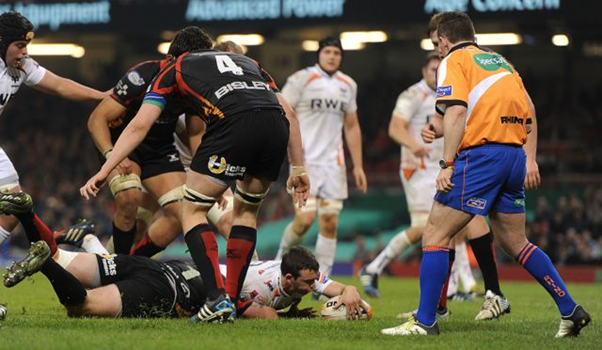 The Ospreys trailed 9-0 with just five minutes remaining in the first half, only to rack up 31 points in as many minutes to claim a bonus point win.

In an enthralling contest, Dan Evans, Dan Biggar, Tom Grabham and Ben John all scored tries, with man of the match Biggar converting all four and slotting over a penalty for good measure. 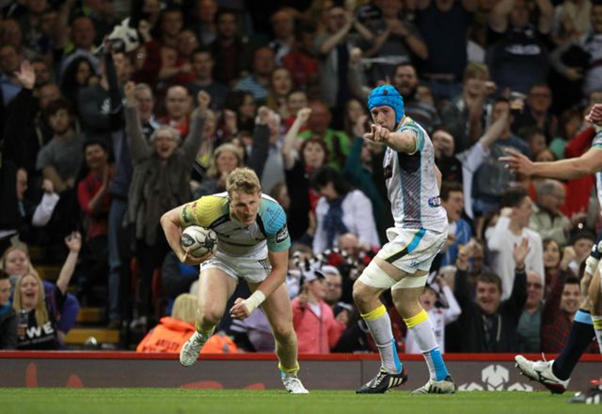 The Ospreys crossed the line six times, five tries coming in the second half, to secure the victory in a real humdinger of a derby match that saw the lead change hands seven times before Steve Tandy’s team managed to pull away in the final 10 minutes to score a 10th straight league win over the Blues.

A tight first half saw the Blues go in at the break with a narrow 9-7 lead, man of the match, James King, with the first Ospreys try.

The second half was a completely different story as the two teams shared seven tries, five going the way of the Ospreys. Hanno Dirksen got two tries in five minutes before Sam Underhill went over with 10 to play.

A Gareth Anscombe penalty in the 72nd minute meant that the Blues lead by a point. Incredibly though they were denied even a losing bonus from the game as two Rhys Webb tries in the final three minutes, including an NFL style dive over the top of a ruck in the corner, meant a crazy game swung the way of the Ospreys. 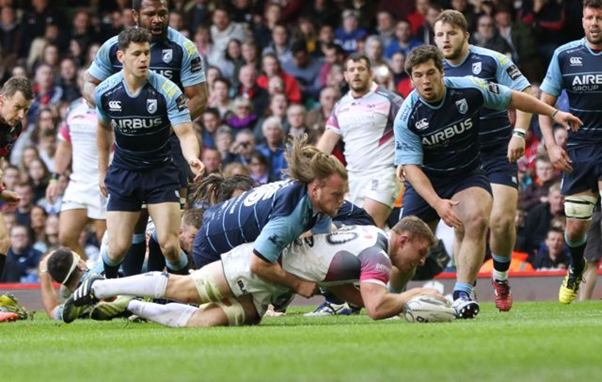 Man of the Match, Dan Biggar, scored 21 points, including a late, game-winning drop goal as the Ospreys left it late to secure victory after being made to battle all the way.

Alun Wyn Jones scored a first half try to help his team to an early 10-3 lead, which was overturned by two Blues scores in quick succession before half-time that saw them lead 20-13 at the break.

The Osprey dominated the second half, Biggar keeping the scoreboard ticking over, including a try at the end of the third quarter, but a Gareth Anscombe penalty kept the capital region in front.

As the clock ticked towards 80, Biggar levelled with a straightforward three points, with seven minutes to play, before using all his experience to drop back in the pocket and slot over a drop goal that took his team back in front, a position they didn’t relinquish.

The Ospreys held their nerve to secure the spoils on an evening of drama, the win ensuring a home tie in the Champions Cup play-off next month at the expense of their opponents.

Ospreys bound Gareth Anscombe scored all of the Blues 13 first half points including a stunning long range try but the Ospreys led by three at the break.  Cory Allen touching down with Sam Davies kicking 11.

A strong start to the second period saw Nicky Smith touch down and the Ospreys led by 10 but yellow cards for Allen and Dan Evans swung the balance back to the Blues, Josh Turnbull with a try, and it was all square at 23-all with 10 minutes to play.

Davies’ fourth penalty with less than 60 seconds to play, taking his personal tally to 16, secured the win. 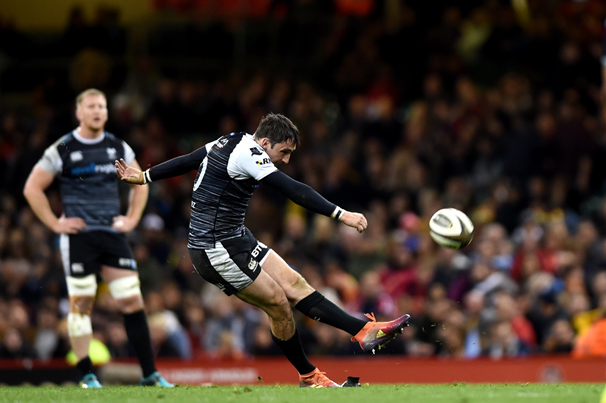